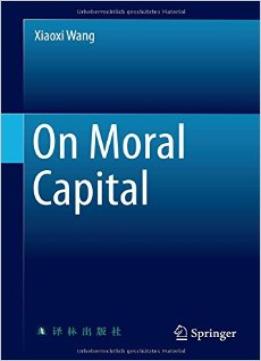 This book promotes the original concept of “Moral Capital” as the key to analyzing the nature and function of morality in economic activities. The book is divided into three major sections. In the first, the author argues that the logical connections between morality and economy and those between morality and profit provide a concrete theoretical basis for the concept of moral capital. In the second, the author elucidates the concept, the form and the functional mechanism of moral capital. In the third, the author describes the economic ethics of traditional Chinese intellectual history, especially the main idea of morality’s role in economics, which shows the historical narrative of this concept and provides resources on ideological history, helping businesses to establish their own moral capital approaches and accumulate moral capital. In the fourth, the author explores the special economic role of morality, and proposes an evaluation index system for assessing moral assets in enterprises, demonstrating the concept of moral capital’s significance from both a theoretical and application-oriented standpoint.