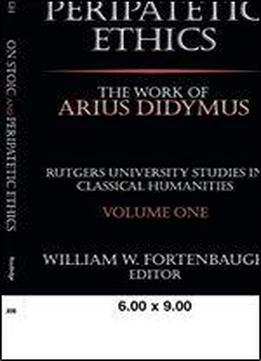 On Stoic And Peripatetic Ethics: The Work Of Arius Didymus
by William W. Fortenbaugh / 2002 / English / PDF

This edition of volume 1 in the series Rutgers University Studies in Classical Humanities concerns Hellenistic ethics. Its particular focus is the compendium of Stoic and Peripatetic ethics attributed to Arius Didymus, court philosopher to the Roman emperor Caesar Augustus. Arius was admired in antiquity for his Consolatio addressed to Livia, Augustus' wife, on the death of her son Drusus. He was also known for having advised Augustus to spare the inhabitants of Alexandria when that city fell to the army of Augustus. Arius was, then, an important advisor to a powerful emperor he held the position that Plato dreamed of and Kant recommended. He advised the ruler of the Mediterranean world and practiced an ethics based on his knowledge of Hellenistic philosophy. That knowledge is discussed in On Stoic and Peripatetic Ethics. Prior to the publication of On Stoic and Peripatetic Ethics, Arius was best known in the English-speaking world for fragments concerning physical philosophy. There were some works in German and Italian but discussion in English was meager and largely inconsequential. Within the English-speaking world, there is now a significant and growing body of scholarly literature on Arius' compendium. Far from supplanting the present volume, this body of literature underlines the importance of the volume and builds on issues raised in it.