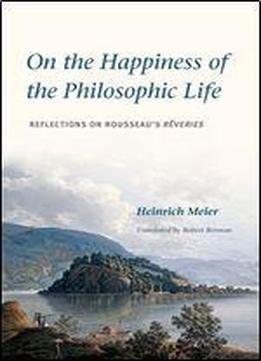 On The Happiness Of The Philosophic Life: Reflections On Rousseau's Rveries In Two Books
by Heinrich Meier / 2016 / English / PDF

Rousseau"Reveries" has been primarily viewed much more as an autobiographical text, than as a philosophical one. Heinrich Meierbook argues that it is in fact a work of philosophy, specifically on the happiness that results from leading a philosophic life. With the "Reveries" constantly in view, the first part of Meiervolume explores the philosophic life more generally: its foundations, distinctive features, political conditions, and the happiness it provides. Meier then turns in the second part of his volume to discuss a famous section of Rousseau"Emile," the Profession of Faith of the Savoyard Vicar. It is this section that led to the book being banned in Paris and Geneva.. Meier argues that in this text Rousseau lays out the foundations necessary for one to lead a happy, non-philosophic life. Meieranalysis provides the first detailed philosophic interpretation of this important text as a whole. More generally, Meier also makes a persuasive case for the philosophical significance of Rousseauthought a position many philosophers do not share and explores in depth his philosophical theology. The fruit of thirty-five years of study of Rousseau Meier is the editor of an acclaimed German critical edition of Rousseau"Discours sur l inegalite" Meiervolume is an indispensable guide to understanding Rousseau and the nature of the philosophic life."