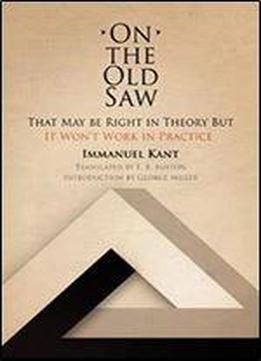 On The Old Saw: That May Be Right In Theory But It Won't Work In Practice
by Immanuel Kant / 1974 / English / EPUB

In this famous essay, first published in 1793, Kant considers the alleged conflict between theory and practice in the conduct of human affairs in three widening contexts: those of the common person faced with a moral decision, of the politician and the citizen concerned with the extent and limits of political obligation, and, finally, of the citizen of the world whose actions have a bearing on war and peace among nations. Unlike other animals, Kant reminds us, people must decide how they will live their lives. They therefore ask for a guide to action, a set of principlesa theory. From the outset, Kant rejects the ancient claim that the practical possibilities of action cannot always be reconciled with moral demands. He offers his own moral theory, a theory starting out from the principle of the right as an unequivocal guide to action. In partial disagreement with the rival theories of Hobbes and Locke, he proposes that the only condition under which the individual can achieve true destiny as a person and a member of the human race is the civil state. Such a state can be secured only by law. Although "from such crooked wood as man is made of, nothing perfectly straight can be built," only the rule of law can bring about a stable society. Last, Kant turns to the relation between theory and practice in international relations. "Nowhere," he writes, "does human nature appear less lovable than in the relation of whole nations to each other." But to hope for world peace on the basis of "the so-called balance of power is a mere chimera." There is no other remedy to international lawlessness and war than an international coercive law, and such law can grow only out of sound theory. "I put my trust in theory. At the same time, I trust in the nature of things, and also take account of human nature, which I cannot, or will not, consider so steeped in evil that in the end reason should not triumph."