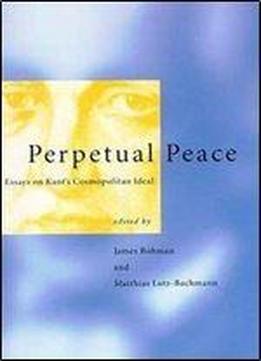 In 1795 Immanuel Kant published an essay entitled "Toward Perpetual Peace: A Philosophical Sketch." The immediate occasion for the essay was the March 1795 signing of the Treaty of Basel by Prussia and revolutionary France, which Kant condemned as only "the suspension of hostilities, not a peace." In the essay, Kant argues that it is humankind's immediate duty to solve the problem of violence and enter into the cosmopolitan ideal of a universal community of all peoples governed by the rule of law.The essay's two-hundredth anniversary, 1995, also marked the fiftieth anniversary of the end of World War II and of the establishment of the Charter of the United Nations. The essays in this volume were written for a conference held in Frankfurt in May 1995 to commemorate these three anniversaries. Together, the authors argue for the continued theoretical and practical relevance of the cosmopolitan ideals of Kant's essay. They also show that history has both confirmed and outstripped Kant's prognoses. As recent events have shown, we certainly have not emerged from the violence of the state of nature. Accelerating globalization also gives these reconstructions and reappraisals of Kant's cosmopolitan ideal a new urgency.Contributors : Karl-Otto Apel, Kenneth Baynes, James Bohman, Jrgen Habermas, David Held, Axel Honneth, Matthias Lutz-Bachmann, Thomas McCarthy, Martha Nussbaum.