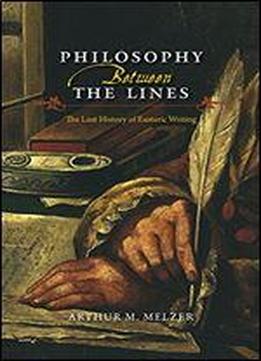 Philosophy Between The Lines: The Lost History Of Esoteric Writing
by Arthur M. Melzer / 2014 / English / PDF

"Philosophical esotericism the practice of communicating one's unorthodox thoughts 'between the lines' was a common practice until the end of the eighteenth century. The famous Encyclopdie of Diderot, for instance, not only discusses this practice in over twenty different articles, but admits to employing it itself. The history of Western thought contains hundreds of such statements by major philosophers testifying to the use of esoteric writing in their own work or others'. Despite this long and well-documented history, however, esotericism is often dismissed today as a rare occurrence. But by ignoring esotericism, we risk cutting ourselves off from a full understanding of Western philosophical thought... Philosophy Between the Lines is the first comprehensive, book-length study of the history and theoretical basis of philosophical esotericism, and it provides a crucial guide to how many major writings philosophical, but also theological, political, and literary were composed prior to the nineteenth century." Publisher's Web site.