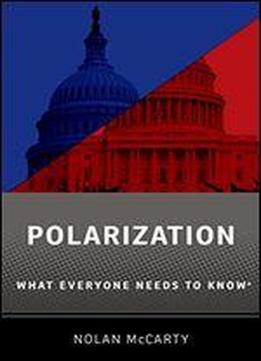 Polarization: What Everyone Needs To Know
by Nolan McCarty / 2019 / English / PDF

"The weeks following the election and inauguration of Donald J. Trump have been a time for reflection about the state of American politics and its deep ideological, cultural, racial, regional, and economic divisions. But one aspect that the contemporary discussions often miss is that these fissures have been opening over several decades and are deeply rooted in the structure of American politics and society. Long before the historically divisive presidential election of 2016, the polarization of American politics has been an important concern of scholars, journalists, and elected officials. Unfortunately, there have been few, if any, attempts to synthesize these debates in ways that are accessible to the educated general public. Polarization: What Everyone Needs to Know