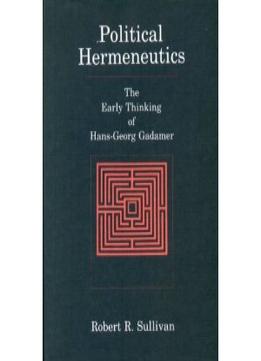 A distinct logic to Gadamer's early writings makes them more than mere precursors to the mature thought that appeared in Truth and Method. They contain their own, new and different, 'philosophical hermeneutics' and are worth reading with a fresh eye. The young Gadamer began his publication career by arguing that Plato's ethical writings did not 'express' doctrine but rather depended upon the 'play' of language among speakers in an ethical discourse community. This was the key idea of Plato's Dialectical Ethics, Gadamer's first book. Following the classical formula of seeing politics as the continuation of ethics, Gadamer's writings in the 1930s and 1940s concentrated on the Platonic idea of the state and argued two key points. First, the exiling of poets from the city was a way of banishing monologue and clearing the way for a dialogue as the language form appropriate to political discourse communities. Second, the Platonic state's defining task was the educational one of shaping the soul, and this could not be achieved monologically but rather had to take place as a dialogical play between the educator and the soul. The mature philosophical hermeneutics of Truth and Method is a metaphor taken from the literary experience of constructing textual meaning out of the play of parts and whole. The philosophical hermeneutics of Gadamer's early writings rests on a play between the ethical whole initially the Gestalt figure of the 'Platonic Socrates' but later the Platonic state and the individual soul in need of ethical guidance. There is no conflict between the early and the later hermeneutics, but the early hermeneutics retain a freshness of spirit and boldness of interpretation that is characteristic of the Weimar culture of Gadamer's Marburg youth. From beginning to end, Gadamer's early writings remind us that Plato's dialogues really do record the conversational essence of Western philosophy at its birth.