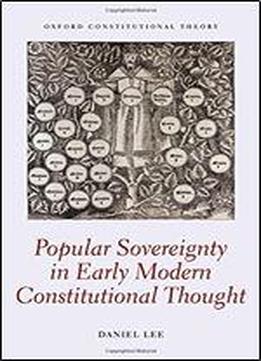 Popular sovereignty - the doctrine that the public powers of state originate in a concessive grant of power from 'the people' - is perhaps the cardinal doctrine of modern constitutional theory, placing full constitutional authority in the people at large, rather than in the hands of judges, kings, or a political elite. Although its classic formulation is to be found in the major theoretical treatments of the modern state, such as in the treatises of Hobbes, Locke, and Rousseau, this book explores the intellectual origins of this doctrine and investigates its chief source in late medieval and early modern thought. Long regarded the principal source for modern legal reasoning, Roman law had a profound impact on the major architects of popular sovereignty such as Francois Hotman, Jean Bodin, and Hugo Grotius. Adopting the juridical language of obligations, property, and personality as well as the model of the Roman constitution, these jurists crafted a uniform theory that located the right of sovereignty in the people at large as the legal owners of state authority. In recovering the origins of popular sovereignty, the book demonstrates the importance of the Roman law as a chief source of modern constitutional thought.