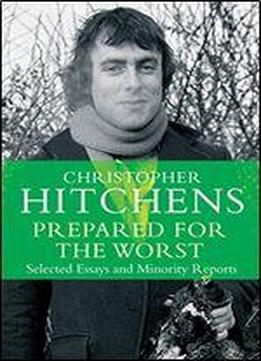 'I suppose that, if this collection has a point, it is the desire of one individual to see the idea of confrontation kept alive' Christopher Hitchens, Introduction Christopher Hitchens is widely recognized as having been one of the liveliest and most influential of contemporary political analysts. Prepared for the Worst is a collection of the best of his essays of the 1980s published on both sides of the Atlantic. These essays confirmed his reputation as a bold commentator combining intellectual tenacity with mordant wit, whether he was writing about the intrigues of Reagan's Washington, a popular novel, the work of Tom Paine, the man George Orwell, or reporting (with sympathy as well as toughness) from Beirut or Bombay, Warsaw or Managua. Hitchens writes clearly, from a well-stocked mind, and is free of the cant that affects many political journalists. - Publishers Weekly