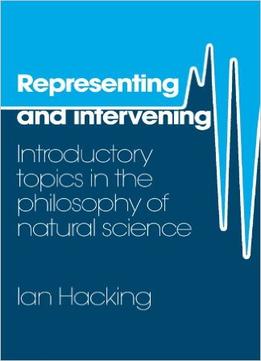 Representing And Intervening: Introductory Topics In The Philosophy Of Natural Science
1983 / English / PDF

This 1983 book is a lively and clearly written introduction to the philosophy of natural science, organized around the central theme of scientific realism. It has two parts. 'Representing' deals with the different philosophical accounts of scientific objectivity and the reality of scientific entities. The views of Kuhn, Feyerabend, Lakatos, Putnam, van Fraassen, and others, are all considered. 'Intervening' presents the first sustained treatment of experimental science for many years and uses it to give a new direction to debates about realism. Hacking illustrates how experimentation often has a life independent of theory. He argues that although the philosophical problems of scientific realism can not be resolved when put in terms of theory alone, a sound philosophy of experiment provides compelling grounds for a realistic attitude. A great many scientific examples are described in both parts of the book, which also includes lucid expositions of recent high energy physics and a remarkable chapter on the microscope in cell biology.