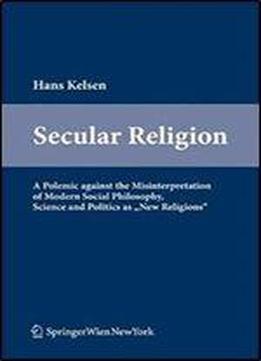 Secular Religion: A Polemic Against The Misinterpretation Of Modern Social Philosophy, Science And Politics As New Religions
by Hans Kelsen / 2012 / English / PDF

Despite reworking and rewriting ‚Secular Religion‘ for about ten years Hans Kelsen finally withdrew the text from printing in 1964. After long and careful consideration the Hans Kelsen-Institut has now decided to lift the veil on Kelsen's somewhat mysterious last book and to bring ‚Secular Religion‘ to a wider public. In this book Kelsen vehemently opposes any attempt to discredit modern science as failed religion, a view prominently held by Kelsen‘s former student Eric Voegelin. Any contemporary trend towards a ‚new‘ de-secularization will have to face Kelsen's criticism. Furthermore, as Kelsen convincingly demonstrates, any trend towards a ‚new‘ theologization holds the danger of totalitarianism. In this context Kelsen's text from 1964 offers an excellent contribution to a current discussion.