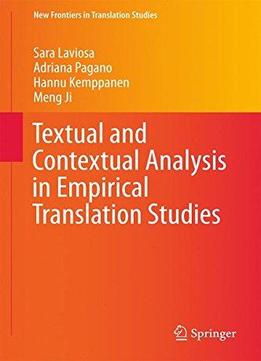 This book presents the state-of-art research in ETS by illustrating useful corpus methodologies in the study of important translational genres such as political texts, literature and media translations. Empirical Translation Studies (ETS) represents one of the most exciting fields of research. It gives emphasis and priority to the exploration and identification of new textual and linguistic patterns in large amounts of translation data gathered in the form of translation data bases. A distinct feature of current ETS is the testing and development of useful quantitative methods in the study of translational corpora. In this book, Hannu Kemppanen explores the distribution of ideologically loaded keywords in early Finnish translation of Russian political genres which yielded insights into the complex political relation between Finland and Russia in the post-Soviet era. Adriana Pagano uses multivariate analysis in the study of a large-scale corpus of Brazilian fiction translations produced between 1930s-1950s which is known as the golden age of Latin American translation. The statistical analysis detected a number of translation strategies in Brazilian Portuguese fictional translations which point to deliberate efforts made by translators to re-frame original English texts within the Brazilian social and political context in the first three decades under investigation. Meng Ji uses exploratory statistical techniques in the study of recent Chinese media translation by focusing three important media genres, i.e. reportage, editorial and review. The statistical analysis effectively detected important variations among three news genres which are analysed in light of the social and communicative functions of these news genres in informing and mobilising the audience in specific periods of time in Mainland China.