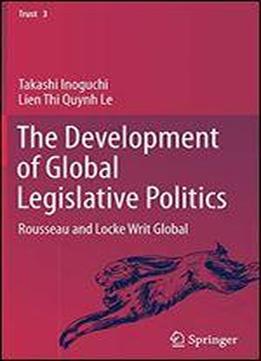 This book is the first systematic scientific study of global quasi-legislation. Taking public opinion and multilateral agreements as the international equivalent to national election and passing laws on the national scale, and extending nation-state concepts to a global society, it analyzes citizens' preferences and the state's willingness to enter into 120 multilateral treaties. After identifying the links as a first step toward conceptualizing quasi-legislative global politics, the book examines how each of the 158 states manifests quasi-legislative behavior by factor-analyzing six instrumental variables such as treaty participation index and six policy domains of multilateral treaties, including peace and trade. It then discusses global change between 1989 and 2008, and conceptually and empirically examines the three theories of global politics that originated during that period: the theory of power transition, theory of civilizational clash and theory of global legislative politics. Lastly, it proposes a theory of global legislative politics. Shedding fresh light on the transformative nature of multilateral treaties, this book attracts researchers and students in political philosophy, international law and international relations as well as practitioners and journalists. Inoguchi and Le have developed a genuinely original perspective on world politics, one that opens up a new research agenda for thinking about state and global actors simultaneously. Anne-Marie Slaughter, Bert G. Kerstetter '66 University Professor Emerita of Politics and International Affairs, Princeton University This is one of those books that warrant a global readership given its emphasis on the implied trust that we invest in public institutions as viewed from an interdisciplinary perspective. Richard J. Estes, Professor of Social Policy & Practice, University of Pennsylvania, Philadelphia, Pennsylvania This book is innovative and distinctive in carving out a new way to look at global legislative politics. I do not know of anything that compares in this interesting and novel niche of international relations analysis. William R. Thompson, Distinguished Professor and Rogers Chair of Political Science Emeritus, Indiana University