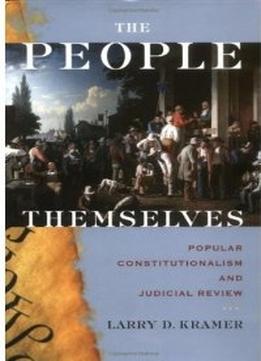 The United States Constitution is the foundation of the longest and most successful democratic experiment in modern human history. It serves not only as legal bedrock for the world's most powerful nation-state, but also, more broadly, it reflects that nation's fundamental aspirations and commitments as a society. Who then has the authority to interpret a blueprint of such extraordinary influence? Americans have come to treat the Constitution as something beyond their competence, something whose meaning should be decided by judges, assisted by a cadre of trained lawyers and academics. Yet this submission to a lawyerly elite is a radical and troublesome departure from what was originally the case. For America's founding generation celebrated the central role of "the people" in supplying government with its energy and direction. In this groundbreaking interpretation of America's founding and its concept of constitutionalism, Larry Kramer reveals how the first generations of Americans fought for and gave birth to a very different system from our current one and held a very different understanding of citizenship from that of most Americans today. "Popular sovereignty" was more than an empty abstraction, more than a mythic philosophical justification for government, and the idea of "the people" was more than a flip rhetorical gesture to be used on the campaign trail. Ordinary Americans exercised active control and sovereignty over their Constitution. The constitutionality of governmental action met with vigorous public debate in struggles whose outcomes might be greeted with celebratory feasts and bonfires, or with belligerent resistance. The Constitution remained, fundamentally, an act of popular will: the people's charter, made by the people. And it was "the people themselves" who were responsible for seeing that it was properly interpreted and implemented. With this book, Larry Kramer vaults to the forefront of constitutional theory and interpretation. In the process, he rekindles the original spark of "We, the People," inviting every citizen to join him in reclaiming the Constitution's legacy as, in Franklin D. Roosevelt's words, "a layman's instrument of government" and not "a lawyer's contract."