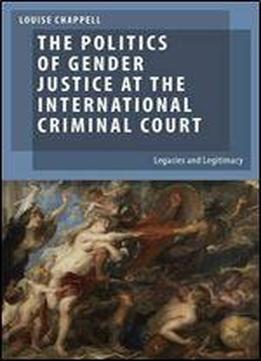 The Politics Of Gender Justice At The International Criminal Court: Legacies And Legitimacy
by Louise Chappell / 2015 / English / PDF

In 1998, the Rome Statute to the International Criminal Court (ICC) emerged as a groundbreaking treaty both due to its codification of international criminal law and its recognition of the crimes committed against women in times of war and conflict. The ICC criminalized acts of rape, sexual slavery, and enforced pregnancy, amongst others, to provide the most advanced articulation ever of gender based violence under international law. However, thus far no scholarly book has analyzed whether or not the implementation of the ICC has been successful. The Politics of Gender Justice at the International Criminal Court fills this intellectual gap, specifically examining the gender justice design features of the Rome Statute (the foundation of the ICC), and assessing the effectiveness of the statute's implementation in the first decade of the court's operation. Louise Chappell argues that although the ICC has provided mixed outcomes for gender justice, there have also been a number of important breakthroughs, particularly in regards to support for female judges. Meticulous and comprehensive, this book refines the notion of gender justice principles and adds a valuable, but as yet unrecognized, gender dimension to the burgeoning historical institutionalist approach to international relations. Chappell links feminist international relations literature with feminist institutionalism literature for the first time, thereby strengthening and adding to both fields. Ultimately, Chappell's analysis is an essential step towards attaining a greater degree of gender equality in the context of international law. The definitive volume on gender and the ICC, The Politics of Gender Justice at the International Criminal Court is a valuable resource for students and scholars of international relations, international law, and human rights.