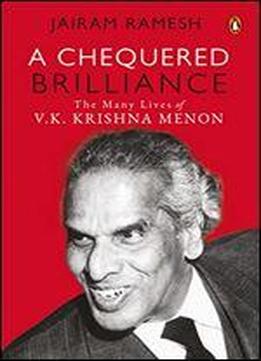 A Chequered Brilliance: The Many Lives Of V.k. Krishna Menon
by Jairam Ramesh / 2019 / English / EPUB

This is a compelling biography of one of India's most controversial and consequential public figures. V.K. Krishna Menon continues to command our attention not just because he was Jawaharlal Nehru's confidant and soulmate but also for many of his own political and literary accomplishments. A relentless crusader for Indian independence in the UK in the 1930s and 1940s, he was a global star at the United Nations in the 1950s before he was forced to resign as defence minister in the wake of the India-China war of 1962.Meticulously researched and based entirely on new archival material, this book reveals Krishna Menon in all his capabilities and contradictions. It is also a rich history of the tumultuous times in which he lived and which he did so much to shape.