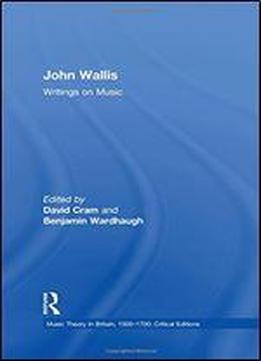 John Wallis (1616-1703), was one of the foremost British mathematicians of the seventeenth century, and is also remembered for his important writings on grammar and logic. An interest in music theory led him to produce translations into Latin of three ancient Greek texts - those of Ptolemy, Porphyry and Bryennius - and involved him in discussions with Henry Oldenburg, the Secretary of the Royal Society, Thomas Salmon and others as his ideas developed. The texts presented here cover the relationship of ancient and modern tuning theory, the building of organs, the phenomena of resonance, and other musical topics.