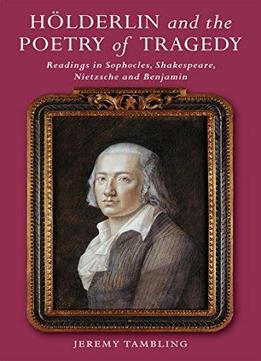 Hölderlin And The Poetry Of Tragedy: Readings In Sophocles, Shakespeare, Nietzsche And Benjamin
by Jeremy Tambling / 2015 / English / EPUB

Hoelderlin (1770-1843) is the magnificent writer whom Nietzsche called 'my favourite poet'. His writings and poetry have been formative throughout the twentieth century, and as influential as those of Hegel, his friend. At the same time, his madness has made his poetry infinitely complex as it engages with tragedy, and irreconcilable breakdown, both political and personal, with anger and with mourning. This study gives a detailed approach to Hoelderlin's writings on Greek tragedy, especially Sophocles, whom he translated into German, and gives close attention to his poetry, which is never far from an engagement with tragedy. Hoelderlin's writings, always fascinating, enable a consideration of the various meanings of tragedy, and provide a new reading of Shakespeare, particularly Julius Caesar, Hamlet and Macbeth; the work proceeds by opening into discussion of Nietzsche, especially The Birth of Tragedy. Since Hoelderlin was such a decisive figure for Modernism, to say nothing of modern Germany, he matters intensely to such differing theorists and philosophers as Walter Benjamin, Theodor Adorno, Martin Heidegger, Maurice Blanchot and Jacques Derrida, all of whose views are discussed herein.

Drawing upon the insights of Hegelian philosophy and psychoanalysis, Hoelderlin and the Poetry of Tragedy gives the English-speaking reader ready access to a magnificent body of poetry and to the poet as a theorist of tragedy and of madness. Hoelderlin's poetry is quoted freely, with translations and commentary provided. This book is the first major account of Hoelderlin in English to offer the student and general reader a critical account of a vital body of work which matters to any study of poetry and to all who are interested in poetry's relationships to madness. It is essential reading in the understanding of how tragedy pervades literature and politics, and how tragedy has been regarded and written about, from Hegel to Walter Benjamin.