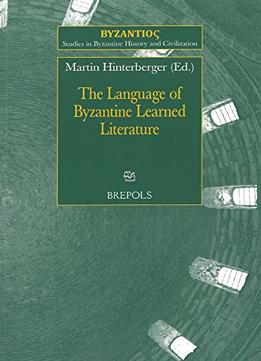 Built on a highly traditional educational system, the language of Byzantine literature was for the most part written in an idiom deeply influenced by ancient Greek texts and grammatical handbooks. The resulting overall archaizing impression of Byzantine Greek is largely why the language of learned literature - as compared with the relatively well researched vernacular literature - has seldom been taken seriously as an object of linguistic study. This volume combines the expertise of linguists and scholars of Byzantine literature to challenge the assumption that learned medieval Greek is merely the weary continuation of ancient Greek or, worse still, a poor imitation of it, while proposing that it needs to be treated as a literary idiom in its own right. The contribution that texts of this kind can offer to sub-fields of Greek historical linguistics is explored using specific examples. Sociolinguistic theory provides a particularly useful framework for a more accurate analysis of the relationship between the vernacular and classicizing varieties of Greek literary language. In addition, the impact of the educational system on the production of texts is examined. In another chapter it is shown that a number of far-reaching assumptions, which originated in the 15th century, about accentuation and the middle voice still tend to colour our understanding of Byzantine, as well as ancient, Greek. Other chapters focusing on particles, the dative and the synthetic perfect reveal that Byzantine authors, while of course influenced by the living spoken language, used their classical linguistic heritage in a creative and innovative way.