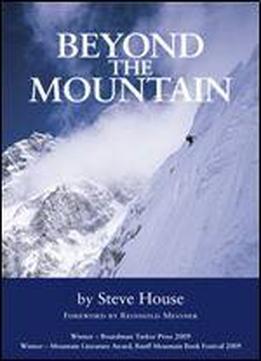 Reinhold Messner calls Steve House the best high-altitude climber in the world today, an honour he declines. 'Being called the 'best", says Steve, 'makes me very uncomfortable. My intention is to be as good as I can be. Mountaineering is too complex to be squeezed into a competition. It is simply not something that lends itself to comparison. Climbing is about process, not achievement. The moment your mind wanders away from the task of the climbing-at-hand will be the moment you fail'. "Beyond the Mountain" is the award-winning title from Steve House - arguably the world's leading high-altitude climber. Winner of the prestigious Boardman Tasker Prize for Mountain Literature in 2009, "Beyond the Mountain" is now available in the UK and Ireland thanks to Vertebrate Publishing. Steve House built his reputation on ascents throughout the Alps, Canada, Alaska, the Karakoram and the Himalaya that have expanded the possibilities of style, speed and difficulty. In 2005, Steve and alpinist Vince Anderson pioneered a direct new route on the Rupal Face of 26,660-foot Nanga Parbat, which had never before been climbed in alpine style. It was the third ascent of the face and the achievement earned Steve and Vince the first Piolet d'Or (Golden Ice Axe) awarded to North Americans. Steve is an accomplished and spellbinding storyteller in the tradition of Maurice Herzog and Lionel Terray. "Beyond the Mountain" is a gripping read - already a mountain classic. It addresses many issues common to non-climbing life - mentorship, trust, failure, success, goal setting, heroes, partnership - as well as the mountaineer's heightened experience of risk and the deaths of friends. "Beyond the Mountain" is a window into the process of a man working to be the best he can be through an endeavour very few can begin to imagine.