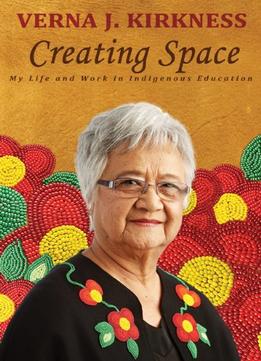 Creating Space is the story of Verna J. Kirkness, a Cree woman from Manitoba, whose simple quest to teach “in a Native way” revolutionized Canadian education. A former elementary school teacher, Kirkness pioneered Cree and Ojibway language instruction in Manitoba schools. In the early 1970s she became the first Education Director for the Manitoba Indian Brotherhood and then Education Director for the National Indian Brotherhood. She played a pivotal role in developing the education sections of Wahbung: Our Tomorrows , which transformed Manitoba education, and the landmark 1972 national policy of Indian Control of Indian Education. These two major works have shaped First Nations education in Canada for more than 40 years. In the 1980s she became an assistant professor at University of British Columbia where she founded the Ts’‘Kel Graduate Program and was a driving force behind the creation of the First Nations House of Learning. Honored by community and country, Kirkness is a visionary who has inspired, and been inspired by, generations of students.