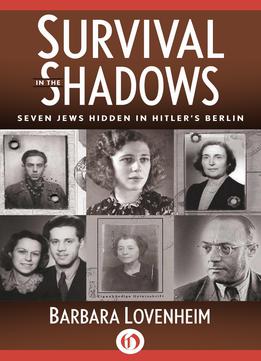 The remarkable true story of two German Jewish families that survived against all odds while hiding in the heart of the Nazi capital In January 1943, unable to flee Germany, the four members of the Arndt family went underground to avoid deportation to Auschwitz. Ellen Lewinsky and her mother, Charlotte, joined them; a year later, Bruno Gumpel arrived. Hiding in a small factory near Hitler’s bunker, without identification cards or food-ration stamps, they were dependent on German strangers for survival. When Russian soldiers finally rescued the group in April 1945, the families were near death from starvation. But their will to live triumphed and two months later, four of the survivors—Erich Arndt and Ellen Lewinsky, and Ruth Arndt and Bruno Gumpel—reunited in a double wedding ceremony. Survival in the Shadows chronicles the previously untold story of the largest group of German Jews to have survived hiding in Berlin through the final and most deadly years of the Holocaust. Relayed to Barbara Lovenheim by three survivors from the group, the riveting story is a touching portrayal of the bravery of these seven Jews, and a heartfelt acknowledgment of the fortitude and humanity of the compassionate Germans who kept them alive.