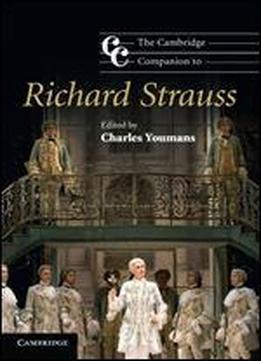 Richard Strauss is a composer much loved among audiences throughout the world, both in the opera house and the concert hall. Despite this popularity, Strauss was for many years ignored by scholars, who considered his commercial success and his continued reliance on the tonal system to be liabilities. However, the past two decades have seen a resurgence of scholarly interest in the composer. This Companion surveys the results, focusing on the principal genres, the social and historical context, and topics perennially controversial over the last century. Chapters cover Strauss's immense operatic output, the electrifying modernism of his tone poems, and his ever-popular Lieder. Controversial topics are explored, including Strauss's relationship to the Third Reich and the sexual dimension of his works. Reintroducing the composer and his music in light of recent research, the volume shows Strauss's artistic personality to be richer and much more complicated than has been previously acknowledged.