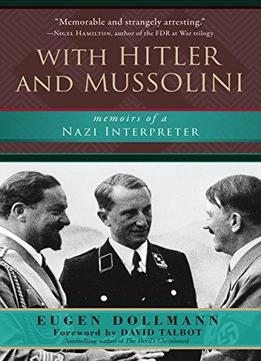 With Hitler And Mussolini: Memoirs Of A Nazi Interpreter
by Eugen Dollmann / 2017 / English / EPUB

An insider’s view of Hitler, Himmler, Heydrich, and Mussolini.

In the years before World War II, Eugen Dollmann arrived in Rome on a scholarship, intending to write a history of the Catholic Church. Instead he joined the Nazi Party and became an interpreter to various members of the German and Italian Fascist hierarchy.

In this capacity Dollmann attended the Munich Conference of 1938 and was present at most of the important meetings between Hitler and Mussolini, also witnessing many of the endless squabbles between Mussolini’s son-in-law Galeazzo Ciano and Hitler’s foreign secretary, Joachim von Ribbentrop. He interpreted for Heinrich Himmler during his visits to Rome and was, curiously for one of his temperament, appointed Obersturmführer in the Allgemeine SS. He played a considerable role in the surrender of the German Army in Italy, helping to prevent the execution of Hitler’s scorched-earth orders.

The book is full of piquant anecdotes—Himmler’s excavations for the legendary treasure of King Alaric; the visit of Reinhard Heydrich to the House of the Provinces, a brothel frequented by officers and men of means; Hitler’s dread and annoyance at being piloted into his newly conquered Ukraine by Mussolini—to mention only a few.

Throughout, Dollmann makes no attempt to conceal or exonerate his association with the Nazis. With Hitler and Mussolini is a fascinating memoir filled with political intrigue, undercover activity, and insights into the biggest personalities connected to the Second World War.